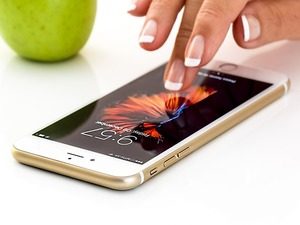 Researchers at Rutgers University have hit upon a novel idea that could be a game-changer in terms of biometric identification. The team published a paper entitled “VibWrite: Towards Finger-input Authentication on Ubiquitous Surfaces via Physical Vibration,” and demonstrated a prototype of the device at the Association for Computing Machinery (ACM) conference in Dallas, Texas.

The new technology is a lesson in simplicity, consisting of a simple vibration motor and a receiver on almost any solid surface (wood, metal, plastic, glass etc.). The motor sends vibrations to the receiver, and when the user touches the surface, the vibration waves are modified, creating a unique signature.

By itself, this isn’t terribly remarkable or exciting, because a single finger touching the surface in question doesn’t create a signature that’s unique enough for individual identification. On the other hand, combining that basic idea with the act of drawing a pattern or entering a PIN on a vibrating surface would create patterns of sufficient complexity to identify individual users, and that’s where the real magic is.

It should be noted that at this point, the technology isn’t ready for mass production, and the research team estimates that it’ll probably be another two years until it is. Among other things the group still needs to improve are:

• Accuracy – There’s not much more to be done on this front. The current model is 97 percent accurate, producing only three percent false positives. However, that last three percent is crucial.

• Sensitivity – At present, the most persistent complaint associated with using the new technology is that users often have to re-enter the PIN, or retrace the pattern multiple times before they can pass the device’s authentication checks.

• Weather – Ideally, these devices could be placed everywhere, but in order for that to become a reality, they’ll need to be tested in a wide range of temperatures and humidity levels, which hasn’t been done yet.

All in all, it’s an exciting new technology with tremendous possibilities. It’ll be interesting to see how well it is accepted by the market.