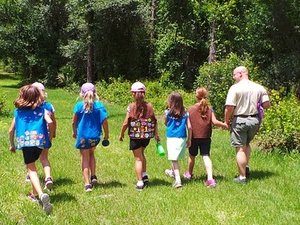 The girl scouts have officially moved into the 21st century.

The Girl Scouts of America recently announced the creation of a whole raft of new badges that address (in the organization’s words) “some of society’s most pressing needs.”

A total of 30 new badges will be available exclusively for girls between the ages of five to eighteen for efforts and advocacy in the following areas:

Badges are awarded on the basis of completing specific tasks. So, for instance, when a girl learns how to code and completes a small project, she could be awarded with the new computer science badge, and when she builds a simple robot, the robotics badge would be awarded.

This is part of an ongoing effort to boost interest and participation in fields where women are generally under-represented.

According to the Girl Scouts USA CEO, Sylvia Acevedo:

“Whether they are fighting cybercrime, exploring how engineers solve problems, or advocating for issues affecting their community, Girl Scouts are learning how to proactively address some of the foremost challenges of today, while also building skills that will set them up for a lifetime of leadership.”

In recent years, the Girl Scouts have struggled to maintain enough membership nationally to remain viable. This is at least one of the reasons why the Boy Scouts of America announced in October 2017 that they would begin accepting girls into their program.

It remains to be seen whether the move to modernize the badges available to girls in the organization will be enough to boost membership and ensure the organization’s long-term viability. Even if it’s not, it’s a fantastic idea and long overdue. Kudos to Girl Scouts’ leadership for taking innovative action, and to all the girls who earn these new badges!